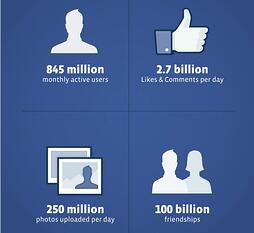 Unless you have been living under a rock, you have probably heard that Facebook has filed their S-1 yesterday. The 150+ pages outlines all the juicy details and fascinating stats. These include but not limited to:

Our partner HubSpot has compiled the 27 most fascinating data and stats out of 150+ pages for us to admire. To see the full list click here.

2. Zuckerberg owns 28% of Facebook, which could translate to $28 billion in worth after the IPO.

4. Marketing and sales expenses increased $243 million in 2011, or 132% compared to 2010. The increase was primarily due to payroll and benefits expense increases because of their 46% increase in headcount.

5. There were 100 billion friend connections on Facebook as of the end of 2011