If I had said that the NBA was hosting a social media award event, I don't think anyone would be too surprised.  With the impact that social media has had on the relationship between fans and professional athletes, an event like the First Annual NBA Social Media Awards seemed only natural. On June 20th, the NBA, hosted its first ever social media awards event, giving out awards to professional basketball players who shined in generating social media blow ups. 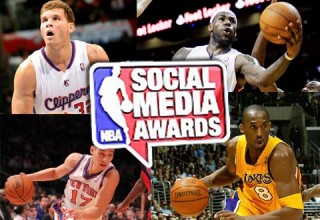 Social media has become increasingly important for connecting athletes and fans. Outlets like Facebook, Twitter and YouTube have helped increase the exposure of the game. As well, social media has helped generate real-time game updates. With the help from the fan themselves, hosts like Shaquille ONeal and Rick Fox were able to hand out awards to deserved playerswho took social media to new heights.

Here are some of yesterday's award winners: