The United States Is Still in an Extraordinarily Good Position

If you look past the immediate economic situation and the recent financial crisis and take stock of the overall picture, the United States is in a great position. Let's look at our outstanding strengths: 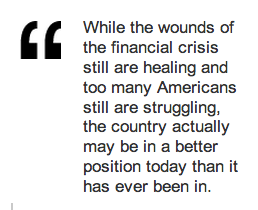 All Americans today benefit from what our forefathers struggled to build – from democracy itself to what is still the best economy in the world. We benefit from the hundreds of trillions of dollars that have been invested over the centuries in research and development, in public infrastructure and in our companies. When my grandfather was born in 1897, there was nothing that resembled the healthcare and technology of today – there were no cars, planes, phones, TVs or computers. Technology and exponentially growing human knowledge are like the energy of “dark matter” – it is everywhere – and it will drive productivity and growth for decades. I have little doubt that a hundred years from now, there will be new technologies that, today, we never could have imagined.

While the wounds of the financial crisis still are healing and too many Americans still are struggling, the country actually may be in a better position today than it has ever been in. In fact, Americans born today hold a far better hand than Americans who were born 50 or 100 years ago – we all clearly stand on the shoulders of all those who came before us.

America, however, does not have a divine right to success

Great potential and past glory do not guarantee future success. This is true for companies, and it is true for countries. America does not have a divine right to success -- we have some serious issues to address. Our immigration policy is flawed. We have yet to find a way for law-abiding but undocumented immigrants to stay in this country. And it is alarming that approximately 40% of those who receive advanced degrees in science, technology, engineering and math at American universities are foreign nationals with no legal way of staying here even when many of them would choose to do so. 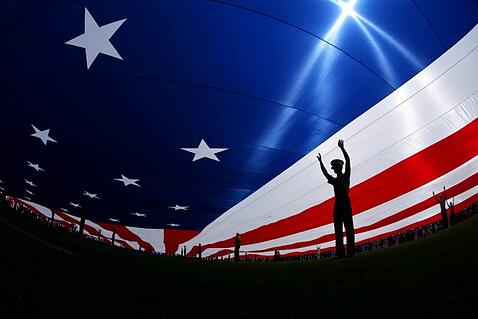 We need five- to 20-year intelligent infrastructure plans (electrical grids, roads, tunnels, bridges, airports, etc.) for our cities, states and federal government. We also need better opportunities for all our citizens, and that can’t happen when 50% of our high school students in the inner cities fail to graduate. And without rational, long-term fiscal policy, including cost-effective reform of our entitlement programs – it will not be possible to establish a proper safety net and to create the incentive for consumers to responsibly take care of their health. It also is time to reform both the individual and corporate tax codes, which are confusing, inefficient and costly. Our corporate tax policies are, at the margin, driving capital overseas, just as, at the margin, our immigration policies are driving brainpower back overseas. The good news is that all these problems are known, and they are solvable. Fixing these issues would greatly increase American prosperity for decades. I also suspect it would improve income equality, a cherished American ideal.

While the U.S. political system appears to be in deep gridlock today, it always has been able to find its way forward. America has exhibited extraordinary resiliency through its darkest moments – and I wouldn’t bet against her today. The future is extremely bright, but we are still going to have to earn it.

Governments around the world, partially but not entirely due to the crisis, generally have been spending more money than they take in. And central banks, mostly as a reaction to the global financial crisis, essentially have been creating money (called Quantitative Easing) to keep rates low and foster a stronger recovery. For the most part, these policies have helped the world economy recover – particularly in the United States. But this medicine is untested, and it may have severe aftereffects. This especially is true if fiscal policy makes it increasingly harder for central banks to slowly remove some of the monetary stimulus. Good fiscal policy and any policies that create growth will make the central banks' job easier. Higher interest rates and a little bit of inflation won’t matter much if we have strong job growth, good profitability and general prosperity.

We don't know the outcome of all these efforts. While it is entirely possible that we will manage through the process without too much suffering, there also are some fairly coherent arguments that suggest there could be significant negative consequences. We cannot ignore this possibility and must safeguard against unintended and adverse outcomes. One such scenario would be rapidly raising rates without strong growth. In the recent past, in 1994 and 2004, interest rates, both short term and long term, rose about 300 basis points within approximately a one-year period. In 1994, such action was unexpected, and it caused real damage for many who were unprepared (i.e., the failure of Orange County and significant financial losses at several financial and non-financial institutions). In 2004, the increase in rates was more expected – institutions probably had additional tools at their disposal to manage it, and the damage was far more limited.

Although we are not predicting it, we need to be prepared for rapidly rising rates, potentially even worse than we have seen in recent history. One of the ways we do this is to position our company – if all things are equal – so we can benefit from rapidly rising interest rates. As we currently are positioned, if rates went up 300 basis points, our pre-tax profits would increase by approximately $5 billion over a one-year period. Remember, however, that all things are not equal, and that $5 billion of improved income should be looked at as an additional cushion to protect us from other bad outcomes. You should know that it costs us a significant amount of current income to be positioned this way. But we believe it is better to be safe than sorry.