This success story was initiated by a man named Lou Pearlman.

When I first met Lou he was a very successful entrepreneur.

He made his money on Goodyear blimps and owned a publicly traded company, but his vision was to start a boy band. I didn’t understand why a person would go from owning a publicly traded company to wanting to start a boy band, but he had his reasons. His cousin was Art Garfunkel from Simon and Garfunkel and he had always been very envious of him. He had more money than his cousin, but Art always had way better parties.

What was the motivation?

It’s an interesting motivation, but sometimes your buyers have unusual motivations too. Sometimes we think they’re concerned about price, or quality, but it’s really about something else. For Lou Pearlman, the motivation was jealousy, and because of it, he created a little band called the Backstreet Boys. He was in Orlando, Florida, which was a great place to start. Disney was there, and along with it lots of kids. Lou had never been in the music industry, but he was a brilliant businessman, and when I walked into his office he had plenty of charts and graphs already set up. He really educated me on how you make money in the music business. He knew that, from a business perspective, in order to become successful, he had to create a band that teenage girls would embrace. 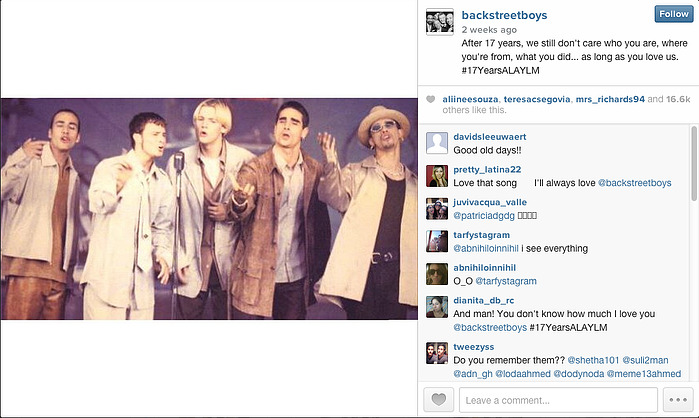 This was back in the early ‘90s when the Internet was just catching wind. There wasn’t any high-speed Internet. It was very basic, almost unrecognizable to what we have today. But there were news groups and chat groups, and Lou knew that these teenage girls would embrace an Internet campaign because they were already using them. Teenage girls figured out news groups and chat groups before anyone else.

So we started an online promotion through these groups, just like you would with LinkedIn and Facebook today, and we confirmed what Lou already knew, that people who used news and chat groups were interested in music. From them we were able to create a database of 3.5 million teenage girls around the world. We did this country-by-country with an automated email system.

When a teenage girl registered with our site, backstreetboys.com, we were able send them an email that was very relevant to them. For instance, one of the questions we asked during the registration was, “Who is your favourite band member?” If they said AJ, they would only receive emails that would come from AJ. If, for example, we knew that you lived in Berlin, we only messaged you when we knew the band was going to be putting on a concert in Berlin. If we were putting on a show in a Berlin shopping mall, we would email every teenage girl in our database who lived in Berlin, and that email would come from her favourite band member.

The email would be short and sweet. It would simply say, “Hey, I’m arriving on American Airlines flight number,” whatever the flight number was, “in Terminal 3. I’d love to see you. Can you meet me?”

On average every girl that we emailed would forward it to 40 other people. We managed to create riots at these airports, even though the Backstreet Boys had never sold an album.

It was all about launch marketing and creating demand. At the time we had to figure out who all of the media were, who were the local radio stations and who the local TV stations were in each city. Remember what life was like before Google? We actually had to call around in order to find that information.

The media would show up with their cameras. They usually couldn’t tell what was going on, but they could see all these screaming teenage girls. The boys would walk off the plane and it would look like the Beatles had arrived. All of a sudden they were getting front-page cover stories and news segments.

The day after such an event another email would automatically be sent to all those girls from AJ, apologising and saying, “Sorry I didn’t get to talk to you. There were so many people. It was crazy. But would you be so kind as to call your favourite radio station and ask them to play our song?” That was how we got a number one song in every market we went into.

Incremental growth of demand and merchandise

You can do it too!

All of this was about using the latest available technology, creating a database, creating relevant communication and building brands.

More blogs llike this one: http://www.n5r.com/blog/surprising-insight-of-marketing-campaigns